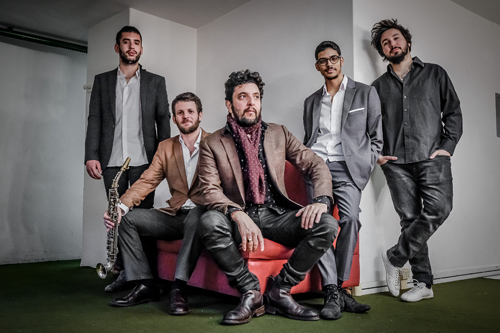 Omer Avital was born on the 13th of May in Givatayim, in the inner suburbs of Tel Aviv, to a Moroccan father and a Yemenite mother. He started learning music at the age of eleven when he took classical guitar lessons at the town’s music academy. Later, when he joined the Thelma Yellin High School for the Arts, he turned to jazz, studying its history and composition, and began to play the double bass.
At the age of seventeen, Omer Avital turned professional and played in jazz ensembles but also pop and folk groups; he performed regularly on radio and television shows as well as at various jazz festivals. After spending a year in the Israeli army band, he settled in New York in 1992 and that is when his career really took off.
As soon as he reached the Big Apple, he played in bands with Roy Haynes, Jimmy Cobb, Nat Adderley, Walter Bishop, Jr., Al Foster, Kenny Garrett, Steve Grossman and Rashied Ali. Keeping in the swing of things, in 1994 he began to work with the pianist Jason Lindner, by whose side he led bands for the first time and performed at the ‘after hours’ sessions at the Smalls Club in Greenwich Village. During the Smalls concerts, Omer Avital often played with ensembles that had an original line-up – often without a piano – for example, a four saxophone sextet for which played the likes of Mark Turner, Myron Walden and Gregory Tardy. Several of these sessions were released on the club’s label, Smalls Records.
It was in 1997 that Impulse! released Jazz Underground: Live at Smalls, an anthology which caused a real buzz and included several recordings of Omer Avital playing as part of a quartet. But the true recording debut of the double bass player as band leader got thwarted; his album Devil Head was never released and it was not until 2001 that Think with Your Heart came out, featuring artists such as Myron Walden, Gregory Tardy and Jay Collins.
In 2003, Omer Avital returned to Israel, where he studied classical music, Arab music and its theories, but also the oud and traditional Israeli music for a period of three years. His return to New York was marked by the release of several albums one after the other, including three which derived from the archives of the Smalls Club and another with the group Third World Love. In 2008, he also won the Prime Minister’s Award, and in 2011 the ASCAP Foundation Vanguard award.
More and more productive, Omer Avital released two albums in 2012, the first with the Yes! Trio, in which he worked with the pianist Aaron Goldberg and the drummer Ali Jackson and the second, Suite of the East, as band leader. The latter was nominated ‘best album of the year’ by the Parisian radio station TSF Jazz. Two years later, it was time for New Song, which came out on Motema in the United States and on Plus Loin Music in France.
Over the years, Omer Avital has established himself as a top-notch double bass player and an A-list musician as well as a band leader with undeniable skills as a visionary composer and arranger. For Abutbul Music, his first real international album, marketed by JazzVillage worldwide, he has a fresh line-up, having gathered around him a quintet made up of young musicians who are part of the New York scene from which he came himself. He decided to make this album in France, the place he first gained recognition after New York. Cut in Paris at the studios of Philippe Tessier du Cros and mastered in La Buissonne just by Avignon, the record is a manifesto for modern jazz and has a powerful, inventive, sometimes almost wild sound.
Abutbul Music showcases a repertoire which combines the swing of contemporary jazz with a spiritual approach. On it are up-beat rhythms and oriental melodies with gospel and soul roots. The album is studded with intense pieces such as New Yemenite Song, Ramat Gan and Afrik, like a series of indicators for this unique approach to ‘world jazz’ or ‘international jazz’ which encompasses pieces like the funky Eser, Three Four and its waltz-like hints, as well as the catchy Bed-Stuy (of which an extended version is included only on the vinyl LP) and Muhammad’s Market.
A multi-cultural musician who has taken full advantage of his Israeli-American status and its many different influences, Omer Avital has been a figurehead on the growing New York music scene for twenty years and has made a major contribution to pushing back the frontiers of jazz. With Abutbul Music he has come up with a constantly shifting, contemporary form of music and proved he is one of the key artists of his generation.
Translation Lorna Coing